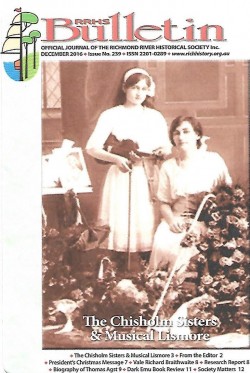 The Society’s quarterly Bulletin includes original articles on historical topics. You can see a sample of a recent Bulletin here. There have been a number of attempts to provide an index to it and its predecessor, the Society’s Journal.

When Richmond River Historical Society was formed in 1936, it was mainly concerned with making people aware of the value of local history and historical research through a series of meetings and lectures. Over the years 1936-1938 a number of local and visiting lecturers gave papers and these were later published in two Journal volumes. However, no index was provided.

The Historical Society went into recess during World War II, and it was not until the early 1950s that the Society was reformed. It soon began to publish a Bulletin which recorded everyday activities as well as presenting some historical papers. The Bulletin has continued and in more recent times it has concentrated mainly on presenting articles of local historical importance. Initially no index was provided.

In the early 1980s Society volunteers  indexed the Journal and began indexing the Bulletin. This has continued off and on up to the current day. There are now two indexes available, one in Excel format and the other in Word format. They overlap for a certain period and need further cumulation. However, the indexers of each version have each chosen a different approach and so there is still a large amount of work to be done. Nevertheless, they are invaluable aids to a great deal of local and family history not available anywhere else.